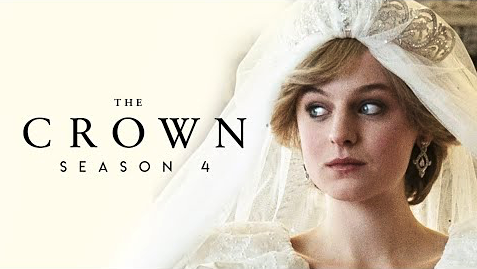 I have enjoyed all 4 seasons so far of the Netflix historical drama series The Crown. Great writing, performances and style give us a fascinating insight into the competing personalities of the British Royal Family and the Palace hierarchy for the last hundred years. I was 6 when Elizabeth Windsor was crowned Queen of England and later watched her motorcade cruise down Odiham High street in Hampshire. 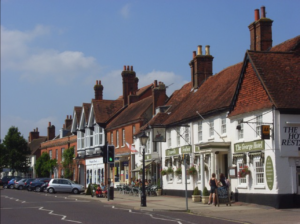 Among the many fascinating portrayals of the political figures of the Queen’s reign is John Lithgow’s take on Prime Minister Winston Churchill. There were those in my parents’ circle who were part of Churchill’s social circle. My mother passed on this possibly apocryphal tale which I have written as a scene:

February 4 1954. A light dusting of snow blown by a strong wind swirls around a line of limousines, Rolls, and Bentleys, as they pass through the Palace gates. Supervising policemen and Household Cavalry Guards shiver in their uniforms. 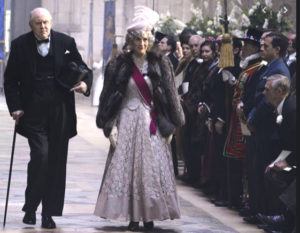 A state dinner is scheduled to commence in 2 minutes. The Prime Minister’s chief Aide looks at his watch. Before the Queen can enter the banquet hall, all guests must be seated. Particularly the guest of honor, the Prime Minister.

The Aide stares at a door on which a sign in Gothic lettering reads: “Gentlemen’s Convenience.” As if in response to his anxiety, the door opens and 80 year old Sir Winston Churchill emerges, still sharp as a tack and looking forward to a grand evening.

The Aide, being a highly paid civil servant, trained in matters of etiquette and decorum in the pre-zipper era, sees that the Prime Minister has neglected to button up his fly. This will certainly be noticed when he stands to make the keynote address in front of the Queen. Amongst the British upper classes of the time there was a euphemistic code for warning a fellow against this potential social embarrassment.

Churchill glances down and observes his error and responded in classic Churchillian cadence.

CHURCHILLDon’t worry. An old bird does not fall
out of its nest. 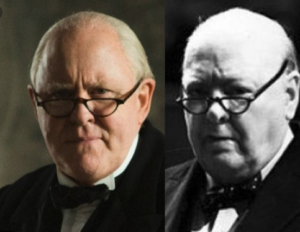 Winston Churchill’s life and accomplishment have for some time been undergoing historical re-evaluation. He inspired England to fight on against fascism. He also made many mistakes, political, military, and moral. Dresden, and Iraq for instance. But he was a complex man, with a progressive streak within his hidebound conservatism. Stephen Fry the British writer and actor told this version of a story that if nothing else reflects Churchill’s sense of humor:

Sir Winston rarely sleeps more than 3 hours at a time, so he is already up sitting at his credenza and going through Cabinet papers, when a knock on the door announces the arrival of his regular morning tea, toast, and a copy of The Times.

A servant enters, deposits a tray, and leaves. Accompanying him is the Aide who was his escort the previous night. He has Sir Winston’s Times in his hand which he places on the tray. In those social circles it was impolite for one man to touch another man’s Times before he did.

CHURCHILLSomething of interest in today’s paper?

AIDENothing of note, Sir. But the afternoon tabloids
and certainly next Sunday’s News Of The World
will be running a story that is of concern.

AIDENo. I’m afraid last night one of our Defense
Under Secretaries was caught in Regents Park
with a young Guardsman. The Guardsman got
away, but the Under Secretary was arrested
and charged with gross indecency.

This could become a media football, given the rabid homophobia of the Lord Chief Justice Rayner Goddard, the recent arrest of renowned stage actor John Gielgud on October 21 1953 in a public toilet. 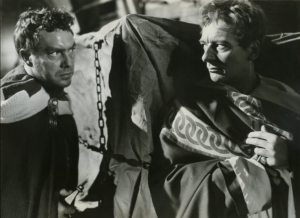 Here is Gielgud (right) that year, playing Cassius to Edmond O’Brien’s Casca in Julius Caesar. The feeding frenzy in tabloid media caused his Knighthood, weeks away, to be postponed for years. America revoked his visa. Lord Montague of Beaulieu had recently been jailed for 12 months on lesser offenses. Embarrassment to the government was a news cycle away. 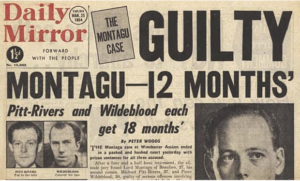 CHURCHILL It was rather cold, I thought…last night.

AIDE Coldest February day on record
according to The Times, sir.

Churchill muses for a moment.

CHURCHILLMakes you proud to be British…

I had written these stories in my first draft of ADVENTURES IN THE B MOVIE TRADE, but as it neared 600 pages, I felt that some social history sidebars that were not specifically film related would have to be saved for another day. As I binged on The Crown I remembered my mother’s stories. You’ll find more about the England of the 1950s in the book.