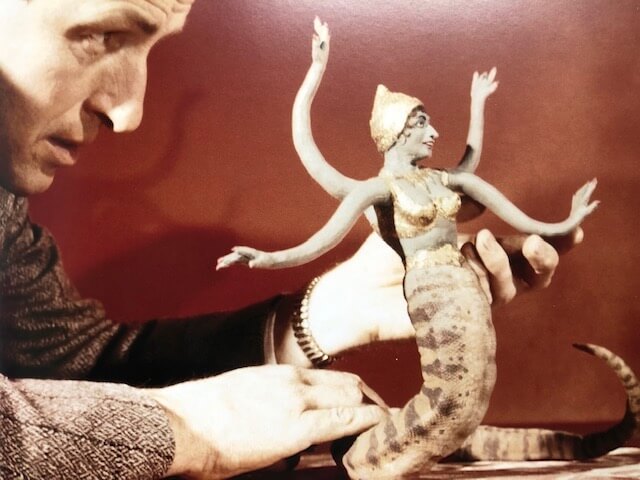 The visual effects shot – an optical illusion sufficiently persuasive for the audience to suspend disbelief – has always fascinated me. Nowadays VFX are the domain of the computer. But it was not always so. Effects used to be done in camera. Here’s a simple illusion, snapped while walking past my neighbor’s field. 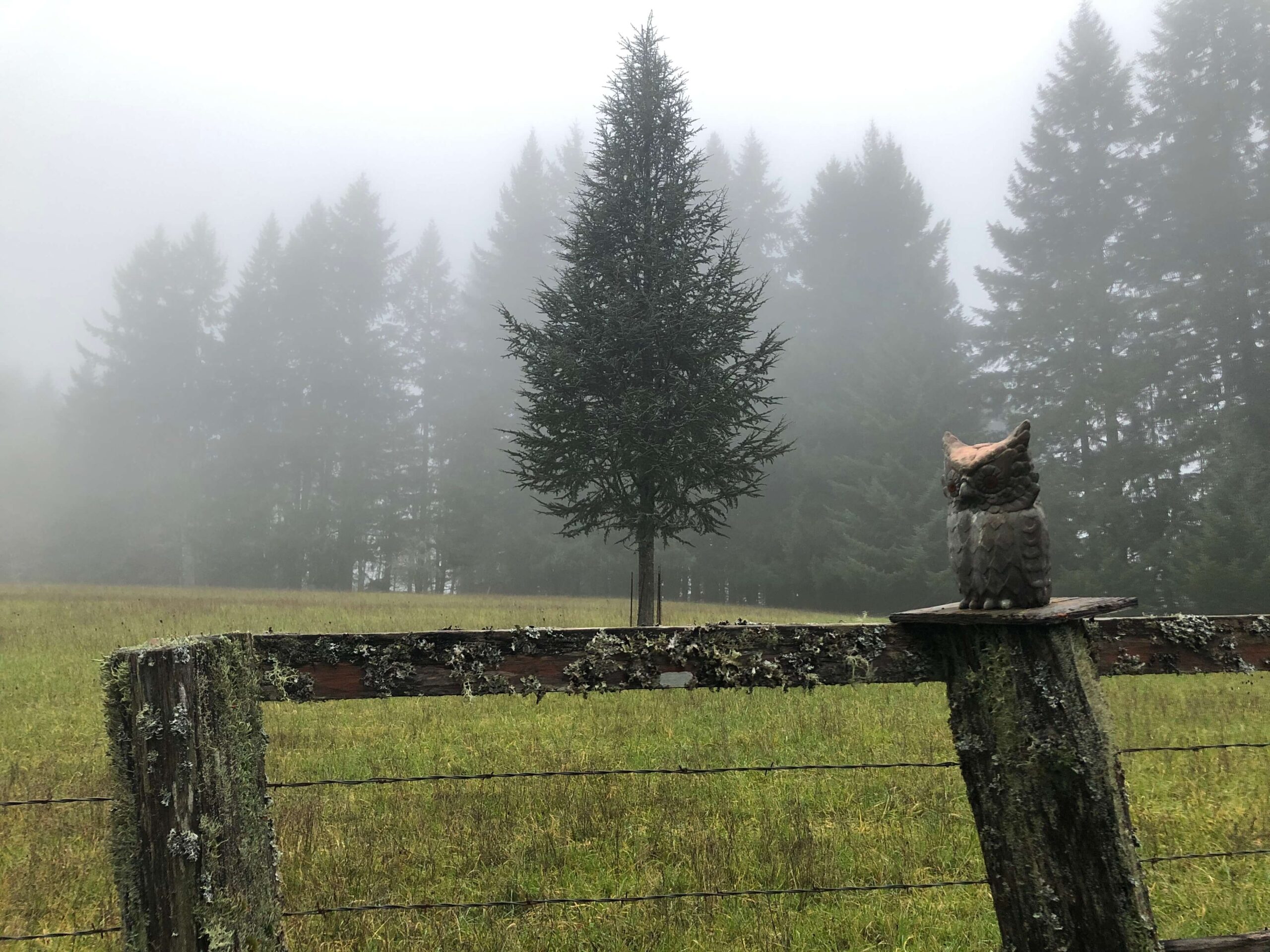 Momentarily it looks like the tree is sprouting from the fence. But then you realize it’s the effect of forced perspective. As a kid I was drawn to films with lots of magical eye candy so George Pal and Ray Harryhausen movies became early favorites. 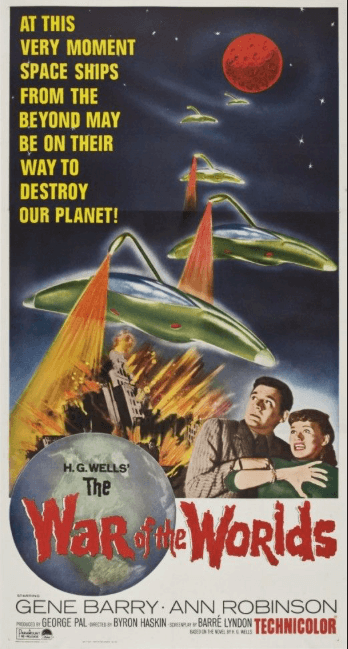 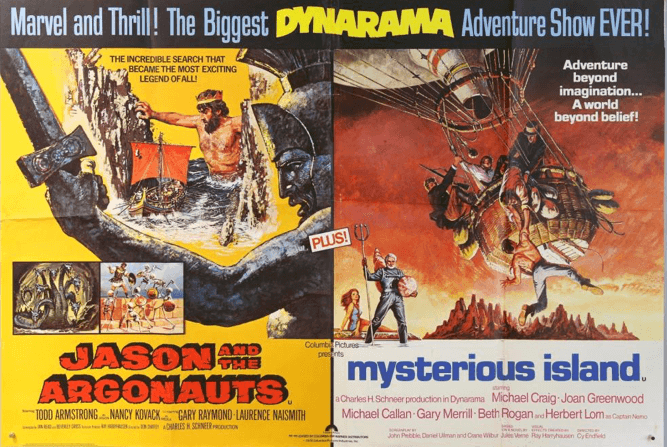 “How did they do that giant castle/volcano/tornado/earthquake/parting of the Red Sea shot?” I wondered, as the credits rolled on each new VFX-enhanced movie. Miniatures played a big part. My first introduction to a miniature was in 1963, when the school Film Circle visited the set of Becket starring Richard Burton, as the 12th Century King Henry the Second, and Peter O’Toole as Becket, the Archbishop of Canterbury whose murder the king unintentionally ordered with the words ” Will nobody rid me of this meddlesome Priest!” 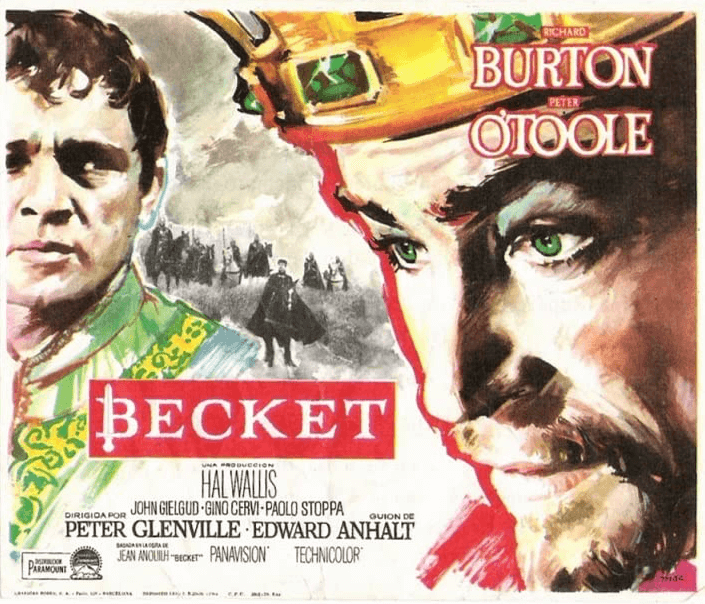 Elizabeth Taylor, recently married to Burton, arrived on the set during the lunch break with a small entourage. We spotty-faced teenagers gazed at the icon with awe. She smiled acknowledgment, but her face really lit up at the sight of her husband returning from lunch with his co-star Peter O’Toole. Burton clearly saw her but walked right past her without acknowledgment. The Cut Direct. What was that about? I saw her smile change to a jab of hurt. Hmm, stars have human foibles too.

We were given a tour of the enormous sets. Shepperton Studios Stage H barely contained an actual size replica of the inside of Canterbury Cathedral, the largest set that had yet been built in Europe. This was the work of our host, the film’s production designer John Bryan, whom I had met the previous year at the location shoot of Tamahine at Wellington College, my school. He took pleasure in showing us an early Hollywood device still in use for making a large set even bigger at minimal expense: the perspective miniature. He had commissioned a miniature of the half of the cathedral dome over the altar that was visible from inside the front entrance. This miniature was semicircular, three feet in diameter, and painted in fine detail. The dome was then suspended from wires above the camera and lowered into a wide angle shot of the cathedral, so that it sat in perfect alignment with the top edge of the set.

A split diopter lens on the camera then balanced the focus between the foreground miniature and the deep background beyond. Bryan explained that same effect could also be achieved by a matte painting of the dome on a sheet of glass positioned in front of the camera in the same alignment with the walls beyond.
Here is a screen capture from another scene in Becket using the same technique. 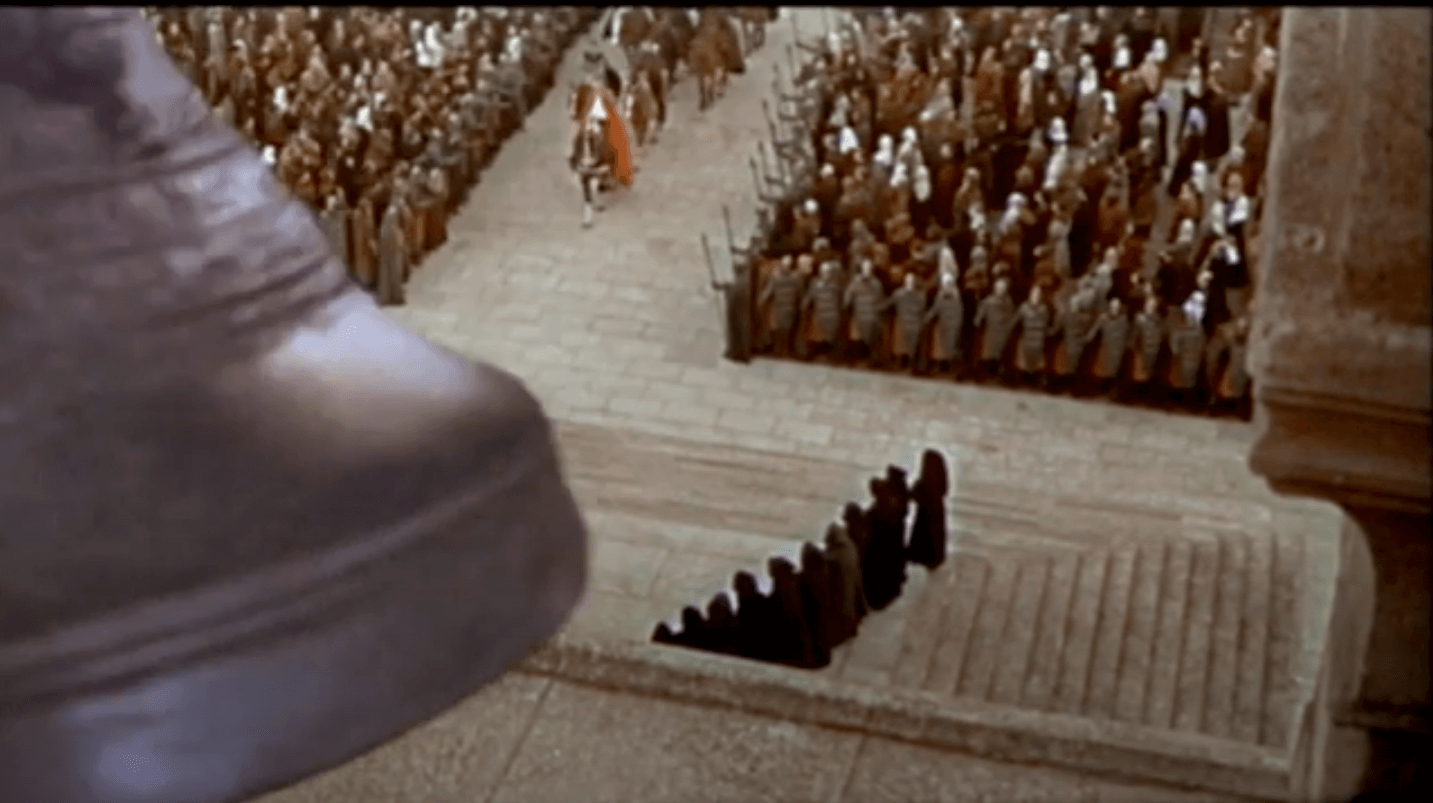 A reduced size replica of the swinging bell is mounted in a reduced size version of the belfry, set up in front of the camera on a high platform, viewing down at the King’s arrival. A full sized bell tower would have been cost prohibitive.

The silent era pioneered the use of hanging miniatures. 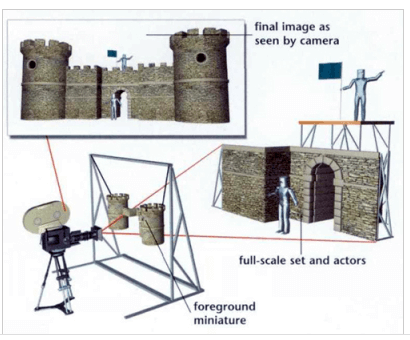 Here a quite substantial miniature has just been positioned to add floors and a tower to the buildings beyond. 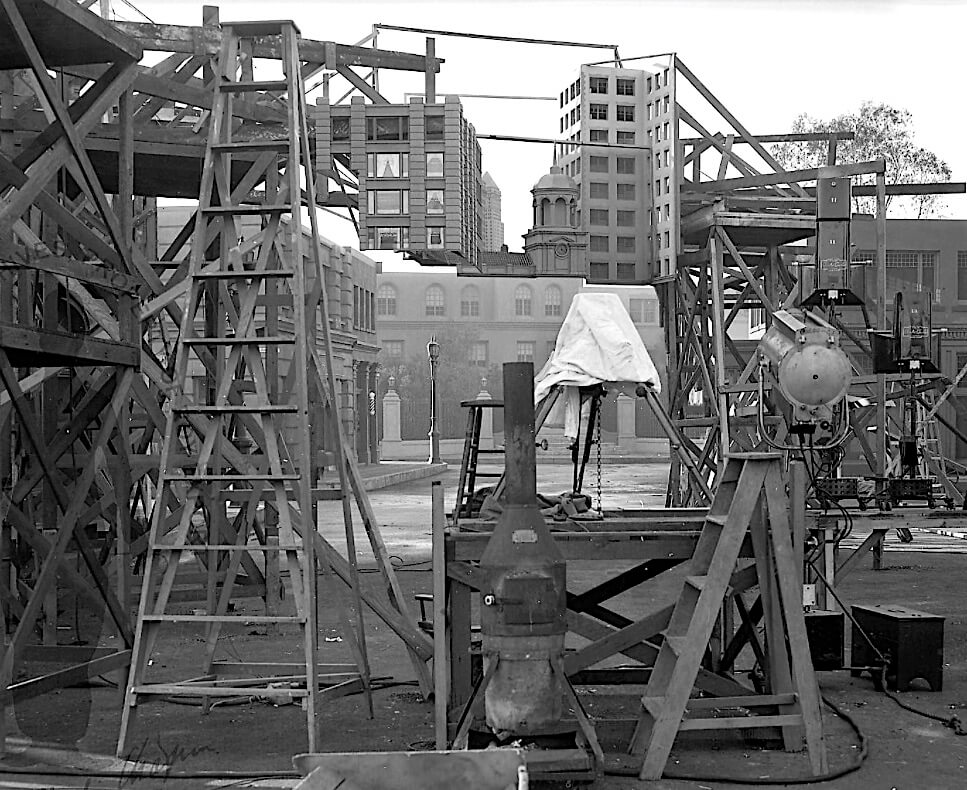 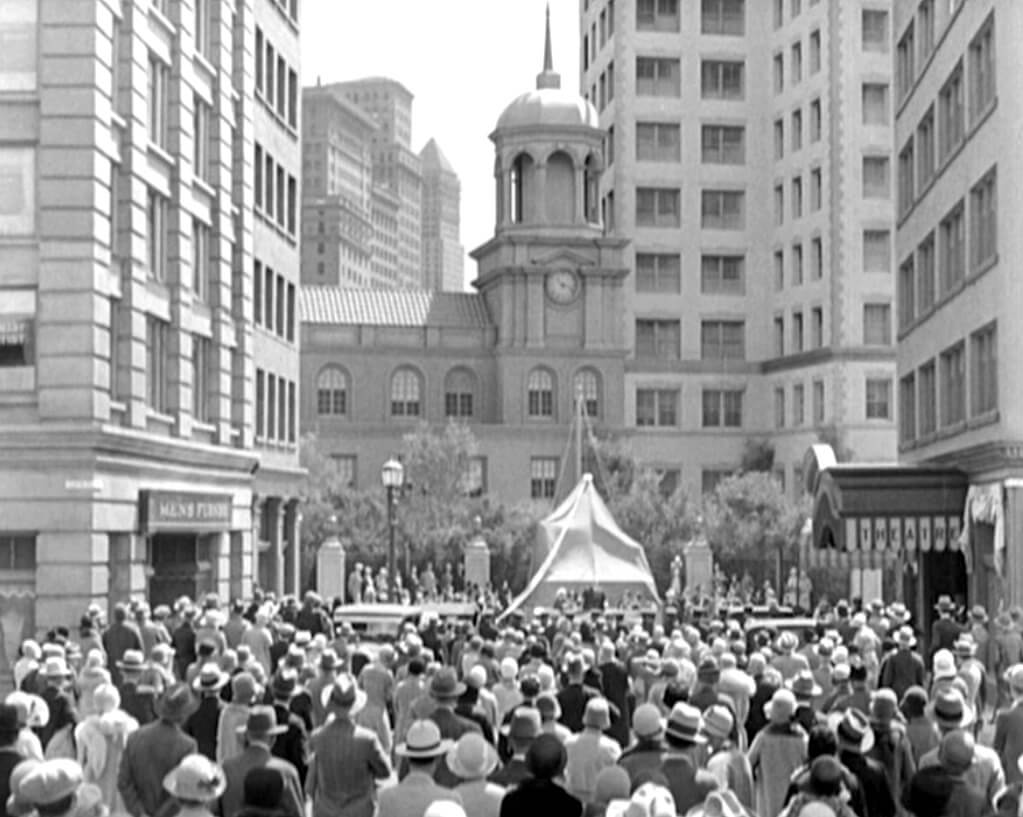 The set for the 1925 Ben Hur’s chariot race was only one side of the arena, where all the action was shot. The race around the other identical side of the arena was achieved by simply flopping the negative. Left to right speeding chariots then hurtled right to left, matching the correct screen direction once chariots had rounded the corner. 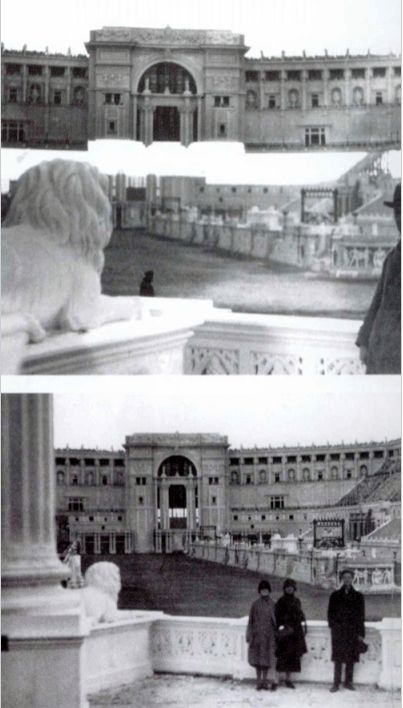 Careful examination will reveal that above the wall surrounding the stadium and the first rows of bleachers, there hangs a miniature with moving ‘puppet’ people that can rise and fall with the human extras. The main reason for using a miniature in this way is that, unlike a painting, the light on the built set will always be the same as that on the miniature making it possible to shoot in a variety of different ‘lights’ during the day. I have such respect for the early pioneers of the art of Visual Effects.

If I’ve whetted your appetite for more factoids about old style cinema magic, here is an extensive website to peruse: MAGICIANS OF THE MINIATURE – Matte Shot.

There are more stories of the magic of movies in my book Adventures in the B Movie Trade.